Having the World Congress in Australia for the first time, and in my home town of Melbourne was very special. The theme for this conference was ‘Nexus’ which is about connections and broadening the reach of positive psychology applications beyond just ‘happier individuals’, and even beyond schools and corporations. How can we use this science to make a better world? Interestingly, of the 30+countries represented at the Congress, five of the top ten countries, (by numbers of delegates), were from southeast Asia. To me, this demonstrates the huge global impact positive psychology is already starting to have. As an Xplore facilitator and coach, who has used this work with thousands of people over the past fifteen years, and also as a teacher of positive psychology on the Monash University Masters of Management program, my work and the intention behind my work is to help people thrive together. Our current world is one where a small few thrive and many do not. Not only do I believe, but I have also seen the research evidence that when we teach women what thriving is and how to get there, organisations, communities and societies start to thrive.

Big words, I know, but the evidence is in: for example, you teach and apply strengths-based approaches in a work context, not only do you get happier workers with better wellbeing, you also get higher performance (see papers and books work by Willibald Ruch, Fabian Gander, Ryan Niemiec, Robert McGrath and others).

I am fortunate to have been introduced to Positive Psychology, the study of human thriving, back during its inception in the early 2000s. The first time I took the VIA Survey of Character Strengths was in July 2004. I began using strengths-based approaches as a coach and facilitator in 2005, and I attended every conference and training opportunity so I could to learn as much as I could about Positive Psychology and strengths. I first worked with Xplore in 2005, and we started weaving and testing strengths, mindset, Appreciative Inquiry questioning techniques into our programs and coaching, and as we observed more and more success for our clients with these approaches, we began using positive psychology as the evidence-based foundation of what we deliver.

Fast forward just over a decade, and Positive Psychology applications are largely embedded throughout education in Australia. It is part of the early years learning frameworks in most States (impacting children 0-5 years); many primary schools and high schools also having varying degrees of Positive -psychology-based education. Unfortunately, this is still heavily weighted towards private education in Australia where there is more funding than the State-based system.

Many corporates are also using positive psychology approaches to underpin, for example, leadership development, change management and even performance review and job crafting. At a community level, some more regions are using positive psychology interventions at a whole of society level, for example, the South Australian Government with its Wellbeing State initiatives, and outside of Australia, we are all familiar with New Zealand Prime Minister Jacinda Arden’s recently introduced Wellbeing Budget.

The conference ran over four days, so it would be impossible to summarise it in its entirety, however, below I’ve highlighted some speakers, sessions and even some books my Xplore colleagues and I recommend. As a team, we are so excited to read more, learn more and get out there and share what we learn with you.

How to foster harmonious Passion and Optimal Functioning in your life, Robert Vallerand

Canadian psychologist Bob Vallerand is a world-leading researcher on passion. He describes what passion looks like used optimal, and also the downside of using passion poorly. His latest book is called Passion for Work. 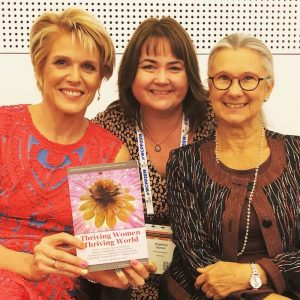 Lead by one of AI’s Founders, Diana Whitney, and Author & GRIT-expert Caroline Adams Miller. Key learning: when women thrive, EVERYONE thrives. I highly recommend their book: Thriving Women, Thriving World and Invitation to dialogue, healing and inspired actions. Click here to get the book.

From the University of Cork, Ireland, neuroscientist John Cryan and his team have been studying the mind/brain/gut connection and how our gut bacteria impacts our happiness. A fascinating topic and a fabulous speaker. Click here to watch is TED Talk and buy the book.

The Coddling of the Anglo-American Mind: the disastrous consequences of ignoring the basic insights from Positive Psychology, Jonathan Haidt

I knew I would enjoy hearing Jonathan Haidt – his book, The Happiness Hypothesis remains to this day one of my favourite, (and often go-to recommendations), on Positive Psychology 101. I had no idea, though, how impactful this session would be. Generation Z (those born after 1996), have THE highest, and increasing rates of depression and anxiety of any generation ever. It gets worse: girls in that generation (particularly those in the 14-18 age bracket) have, what he calls ‘catastrophic rates’ of cutting and suicide (attempts and successful) – and psychologists are showing clear links between lengths of time on social media, (Instagram, snap chat, etc.), social media ‘like’ buttons and how girls use social media. There was a lot more important content in this session, and there are several great books that anyone who is a parent or teacher of Gen Z needs to read.

Strengths for Thriving at times of adversity and opportunity, Ryan Niemiec

Ryan is an Xplore friend from way back – in 2010, we supported Ryan in the running VIA Strengths Intensive Workshops in Sydney and Melbourne. Ryan is Education Director at the VIA Institute on Character, but also a leading writer, speaker, researcher and practitioner on strengths-based approaches. He has, in my view, some of the best, practical books on how to use and apply character strengths. He gave six different presentations at World Congress, and there are TED talks and other videos readily available on the web – look him up! One key takeaway from this particular talk was a great tip for those of us who coach or manage people: if you think about someone’s strengths before you meet or work with them, a study showed that you build better relationships with that person, and also achieve better outcomes together. Food for thought.

Acacia Parks is one of the founding researchers in Positive Psychology, and for the last eight years has been the Chief Scientist at Happify. Happify is an app designed to improve wellbeing. Acacia showed some of the features of Happify (including breather which uses bio-data via your phone to record your stress levels) and also ran through some of the evidence of the effectiveness of this tool. I have friends who are GPs, and I ran out of the session, texting them to recommend this App to their patients. Give Happify a go!

Can we actually find more Meaning in our lives, Michael Steger, University of Colorado, Centre for Meaning and Purpose

One thing I’ve learned in 15 years of positive psychology is that it is easy to become a ‘groupie’ and we can fall into the trap of treating some of the leading researchers in the field like rock stars. Michael Steger was the rock star of this Congress – and for good reason. People crammed to get a seat in his sessions and hung off his every word. I even organised a ticket for my husband to attend his plenary session on Meaning. The answer to his question “Can we actually find more meaning in our lives” is a very simple, “yes” but what sits behind that answer, is not just years, but centuries of research and thinking. The key domains: orientation to time; know our life story; purpose-infused living; authentic self; coping and self-care; healthy relating; reflection and meaning-making; awareness inflow of existence. For a greater understanding of what these areas are about, read Michael’s books and papers or speak to one of us. Final words from Mike: “the thing that makes life precious is that it ends.’

Throughout the conference, those who knew and worked with one of positive psychology’s founders, Chris Peterson (1950-2012), often cited his famous words that positive psychology means ‘Other People Matter’. Barbara Fredrickson is best known for her Broaden and Build theory of Positive Emotion, which describes why we have positive emotions, (spoiler: it’s not just to feel good!). In more recent years, however, Barbara and her team have been focusing on what they call the supreme emotion – Love. Fredrickson argues that “love is connection” and that love “blossoms” any time anyone shares positive emotions, mild or strong. She goes on to discuss what she calls ‘positive resonance’ – an area that, Fredrickson and her lab team using a range of scientific techniques to research. Her work in this area is continuing, and I eagerly look forward to it. In the meantime, she has a book called Love 2.0. Take a look at it!

Angelina Eynon is a Senior Associate at Xplore, an Applied Positive Psychology Practitioner, and an executive coach with over twenty years experience working with individuals and groups within blue-chip corporations, professional service firms, state and federal government departments, local councils and the not-for-profit sector, both in Australia and the United Kingdom.
Posted in: Featured, Positive Psychology, Purpose
All Posts
Scroll To Top